Bauhaus Brought to the Kibbutz

Bauhaus Brought to the Kibbutz:

The kibbutz was born out of a socialist vision based on communal and egalitarian ideology. Its materialization was executed under conditions of poverty and social and economic hardships of the young pioneers, who strove to establish a collectivist society that would sanctify the tilling of the land.

At the beginning of its history, in 1910, the kibbutz doctrine was yet to be formulated, and likewise the premises of the kibbutz architecture. For decades, the pre-state settling institutions (the Zionist Organization, and later the Jewish Agency for Israel) were tasked with designing and executing the movement’s architectural plans. Thus, for example, only as late as 1943 did the Kibbutz HaArtzi of HaShomer HaTzair movement establish its own Planning Department.

In any case, the early kibbutzim’s strenuous conditions called for making do with little, which, in time, developed into voluntary modesty. Such an environment fitted like a glove to the ideas of the Bauhaus school of architecture and design that was founded in Germany in 1919, among other things, in order to furnish an architectural response to Germany’s economic hardships in the wake of WW 1.

It was only natural that the Bauhaus architectural concepts – ornamentation-free functionality, simple straight lines, and non-hierarchal social ideas – would integrate into the kibbutz architecture. Founded in many cases on virgin soil, the kibbutzim revealed themselves as fertile land for architectural experiments that did not celebrate the country’s tradition and past.

Upon the Nazi rise to power in Germany, a number of Jewish architects graduates of the Bauhaus school arrived in Palestine. Having adopted and internalized the school’s concepts, they attempted to translate them into the local architectural vernacular. Thus, a unique kibbutz “Bauhaus” style was created, adapted to the needs of collective-communal society, and differing from the international style, we are familiar with from urban architecture of cities such as Tel Aviv.

In 1930, Ukraine-born Shmuel Mestechkin (1908-2004) left Palestine to study architecture at the Bauhaus school, the studies in which suited his socialist worldview. Back in Palestine (1934), he brought with him Bauhaus concepts, which he utilized first in Tel Aviv and then in numerous kibbutzim and other places in Israel. In 1943, he was asked to participate in the establishment of HaKibbutz HaArtzi’s Technical Department, and serve as its chief architect. In the following years, Mestechkin inspired a generation of younger architects, whose designs clearly reflect the influence of Bauhaus principles.

This exhibition aims at presenting and honoring the kibbutz Bauhaus architecture. It focuses on Shmuel Mestechkin’s designs during the period he served as the chief architect of HaKibbutz HaArtzi Technical Department, and deeply influenced the physical and social structure of the kibbutz landscape.

The exhibition shows images of buildings designed by Mestechkin for different public sites in Israel, as preserved in Mestechkin’s personal archive, kept in the Yad Yaari archives. Eight panels present different conceptual points of view, shedding light on Mestechkin’s special attention to elements such as the building’s integration in the landscape, the functionality of public spheres adjacent to the buildings, the rational use of various materials, and the added value that each material contributes to the structure, the use of rhythms, light and more. One panel, dedicated to the members’ club in Kibbutz Negba, can be seen as a case study for the implementation of these ideas. Another panel, dedicated to buildings in Givat Haviva, describes a varied, unique group of site-specific designs.

The exhibition opens a window onto Mestechkin’s sensitivity as a humanist designer, attentive to generalized functionalism, but just as much – to the individual and his or her feelings. 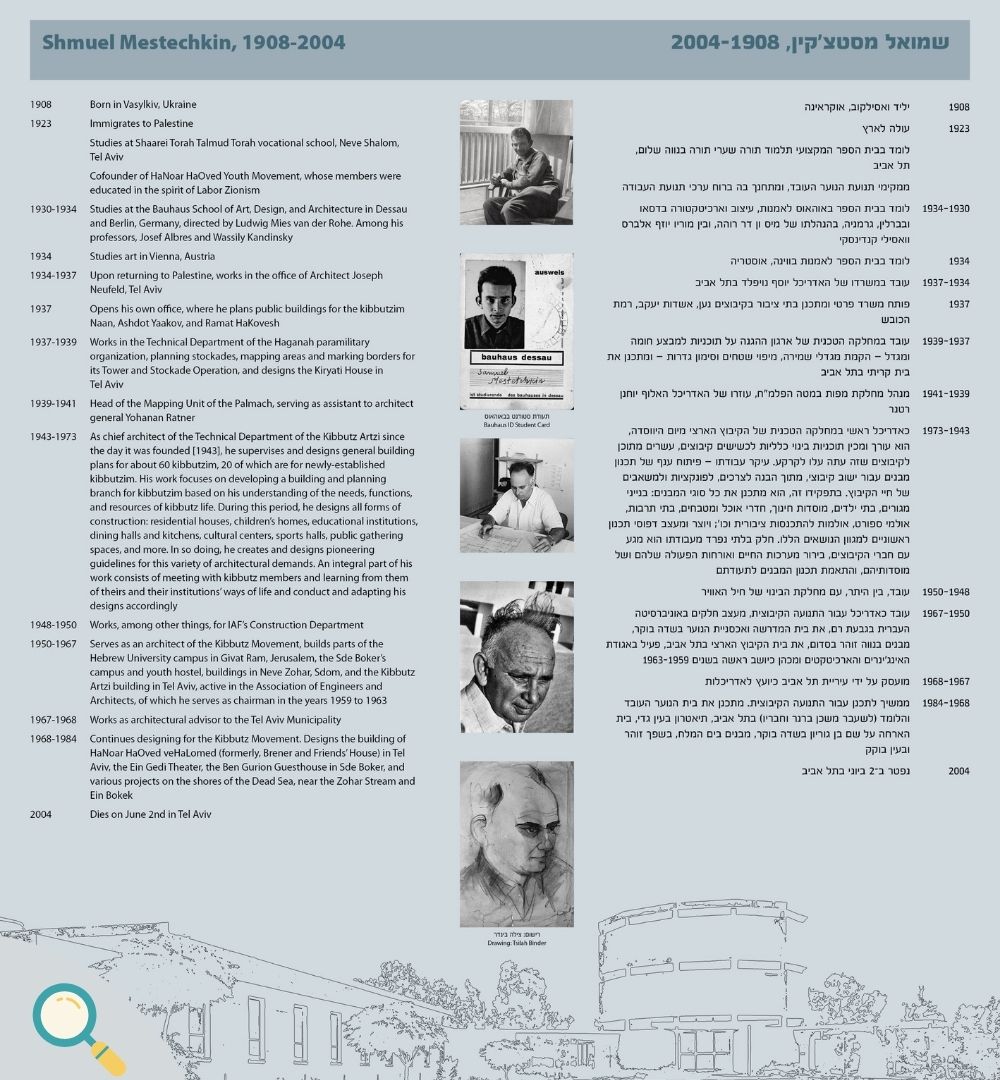 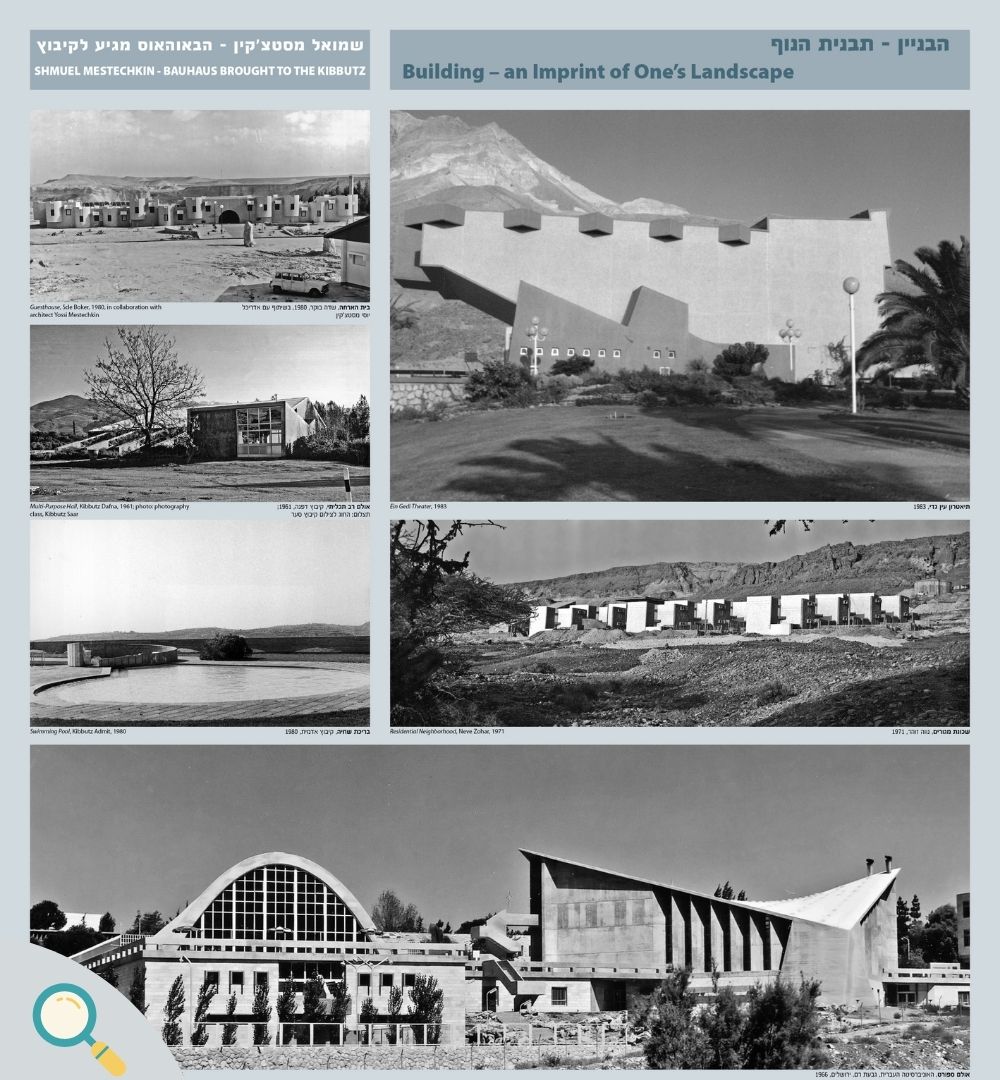 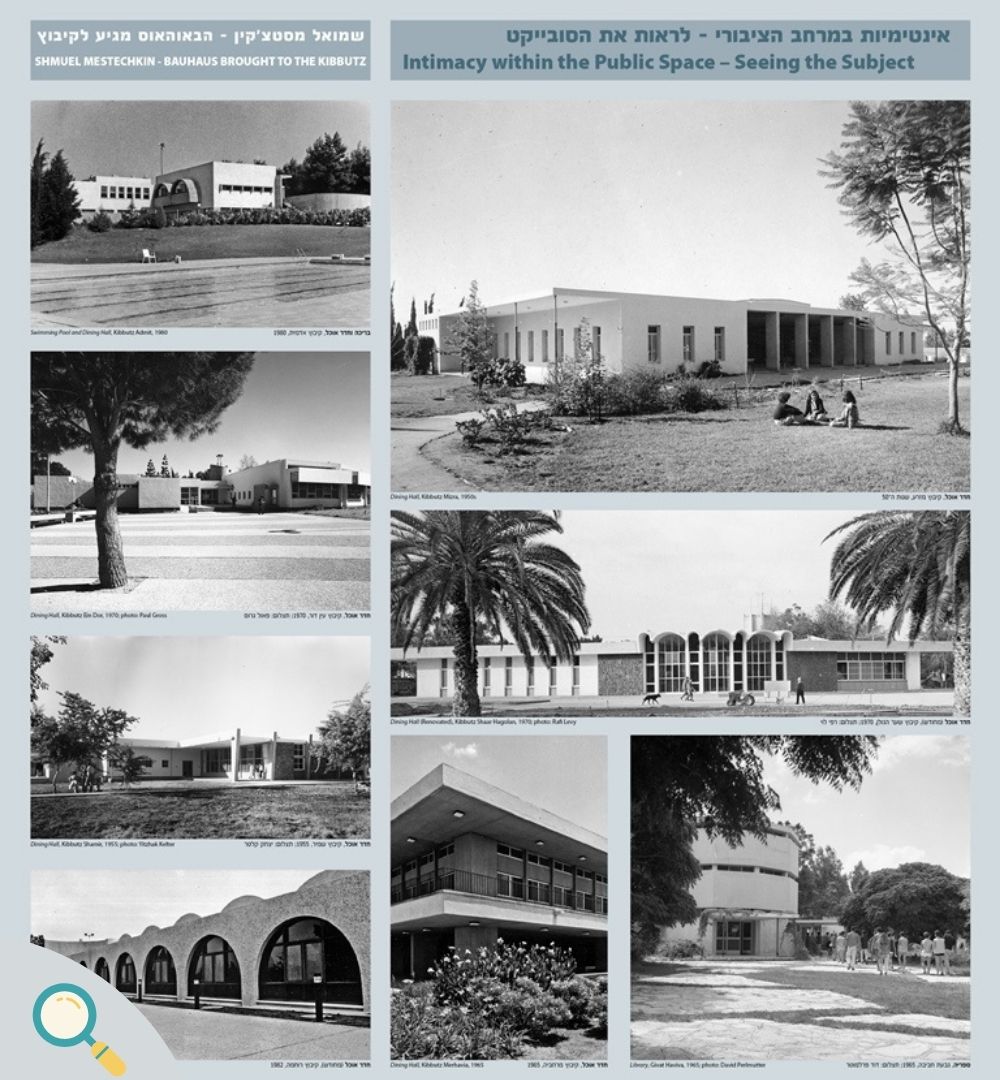 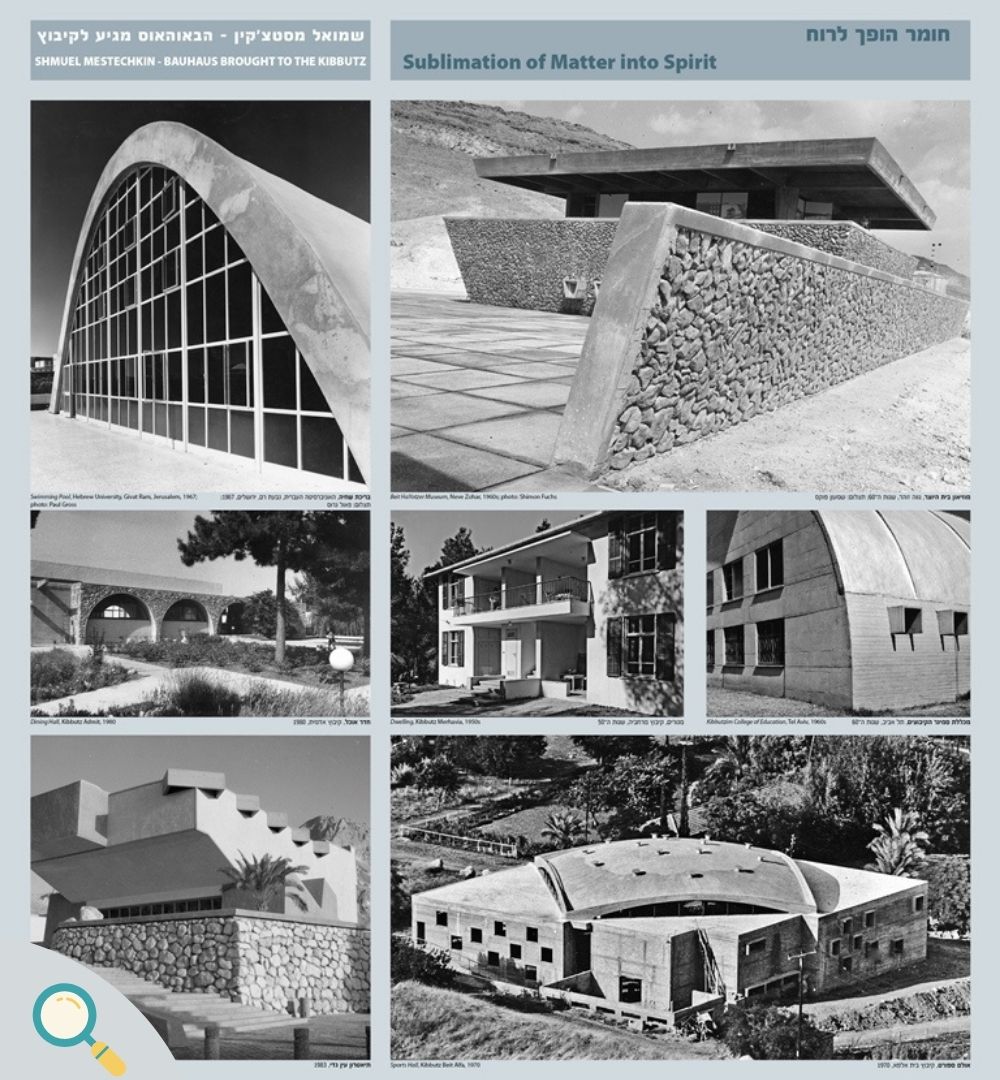 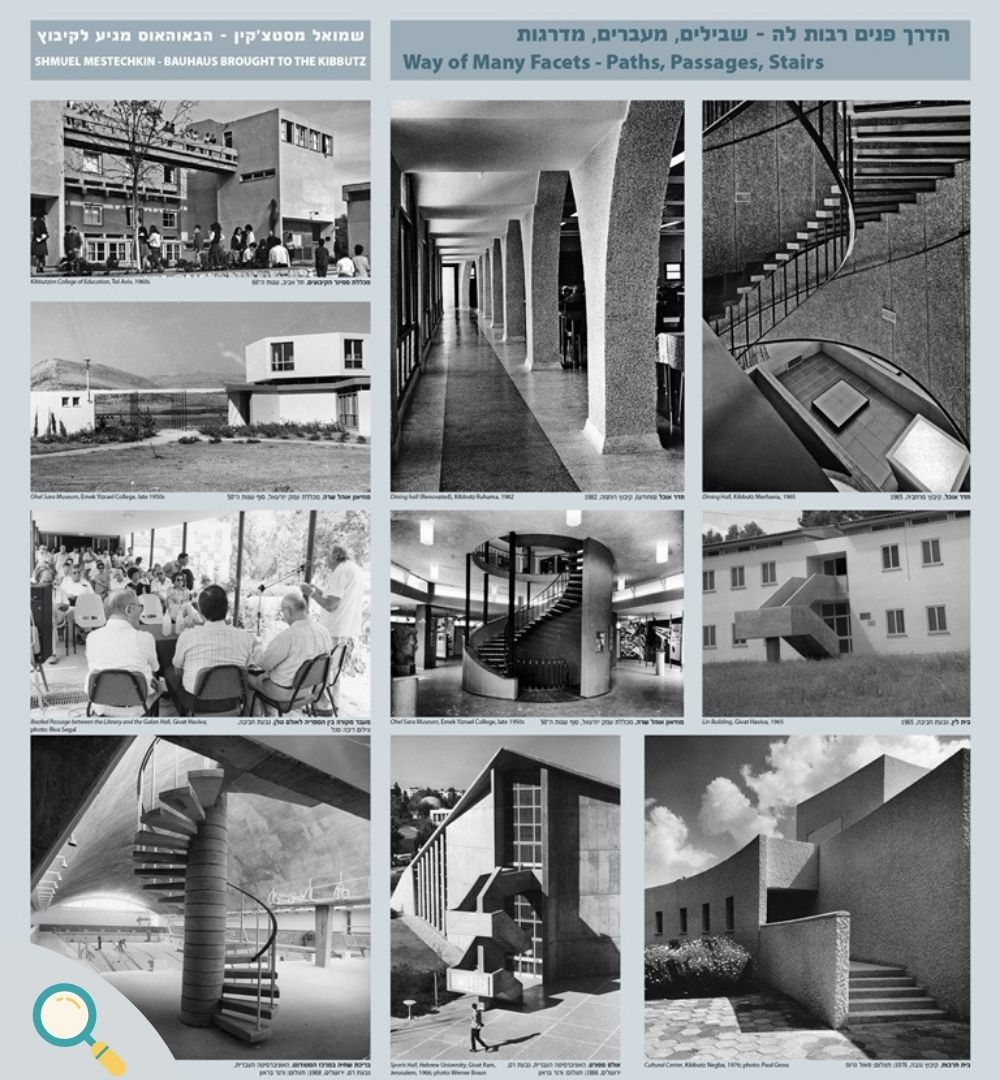 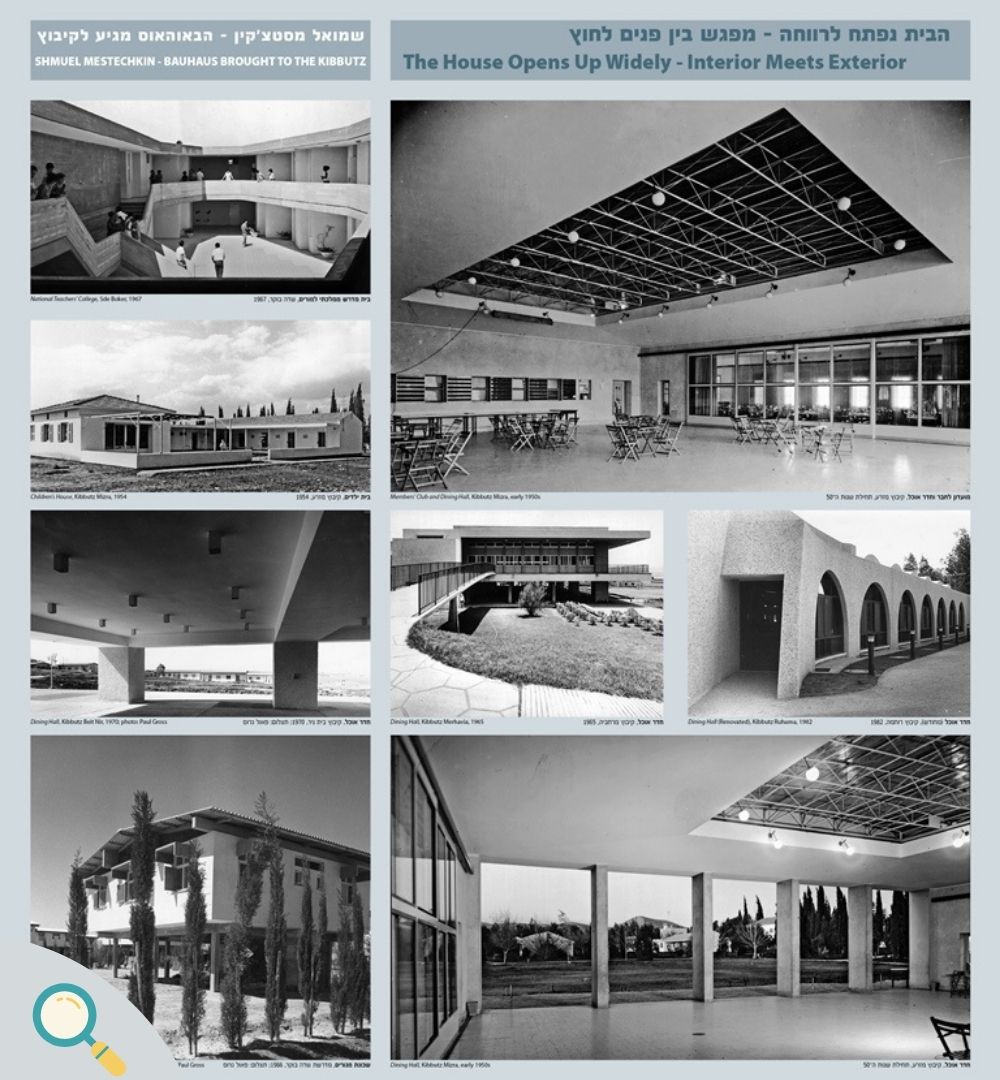 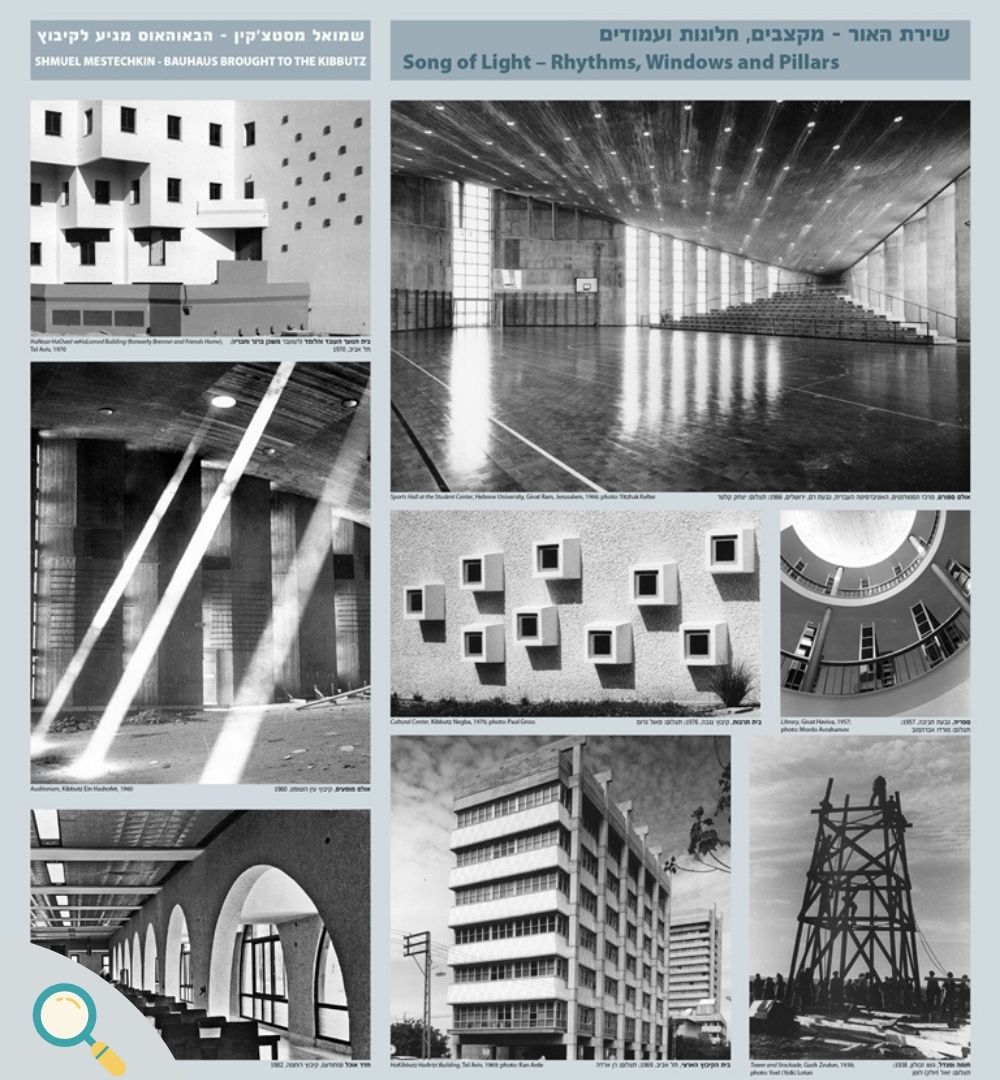 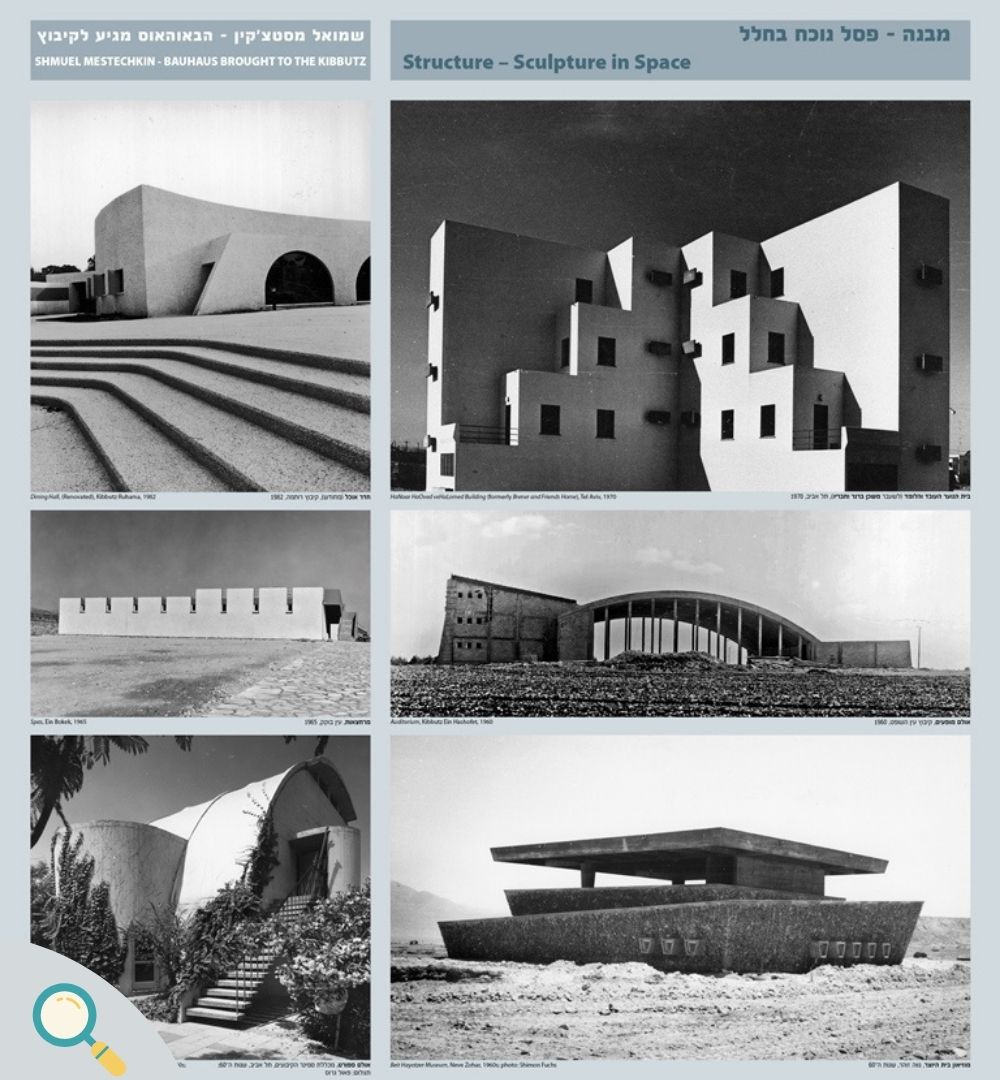 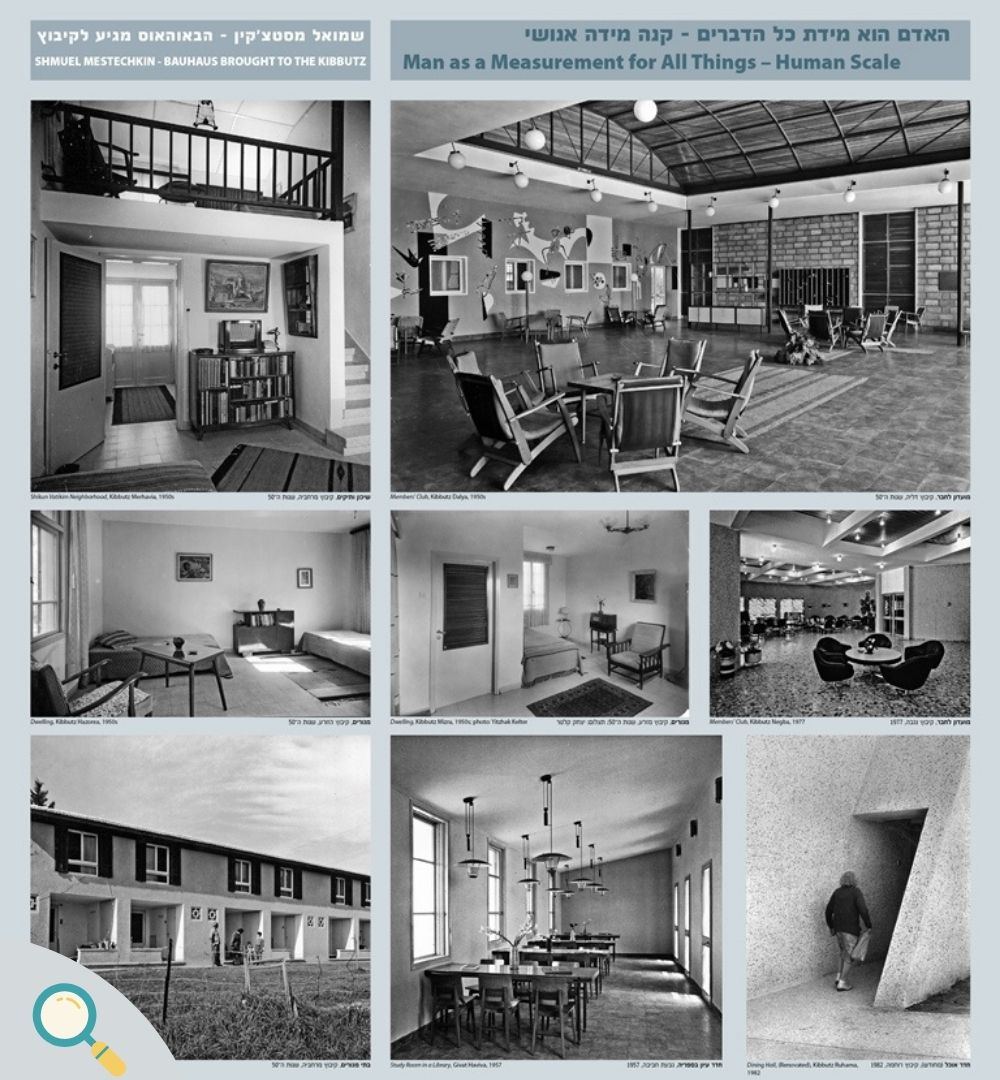 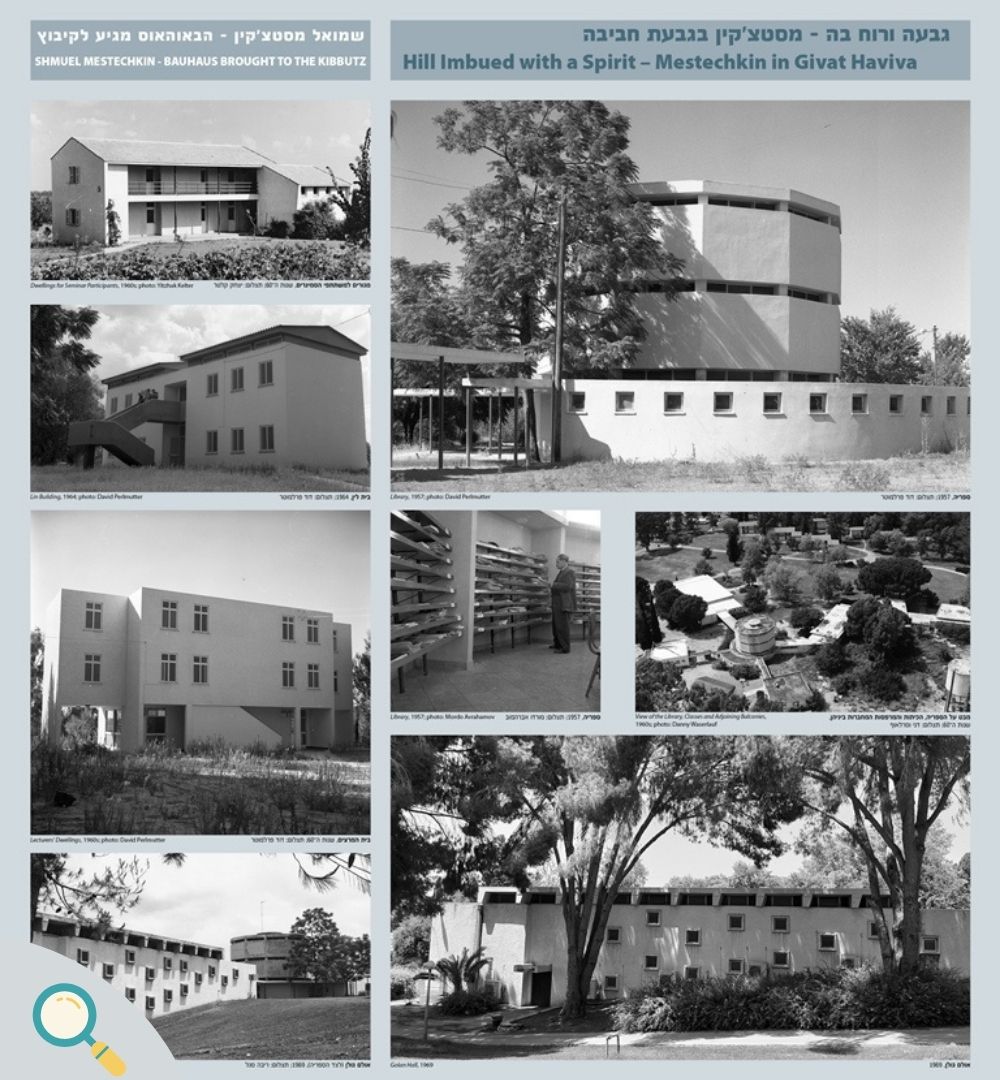 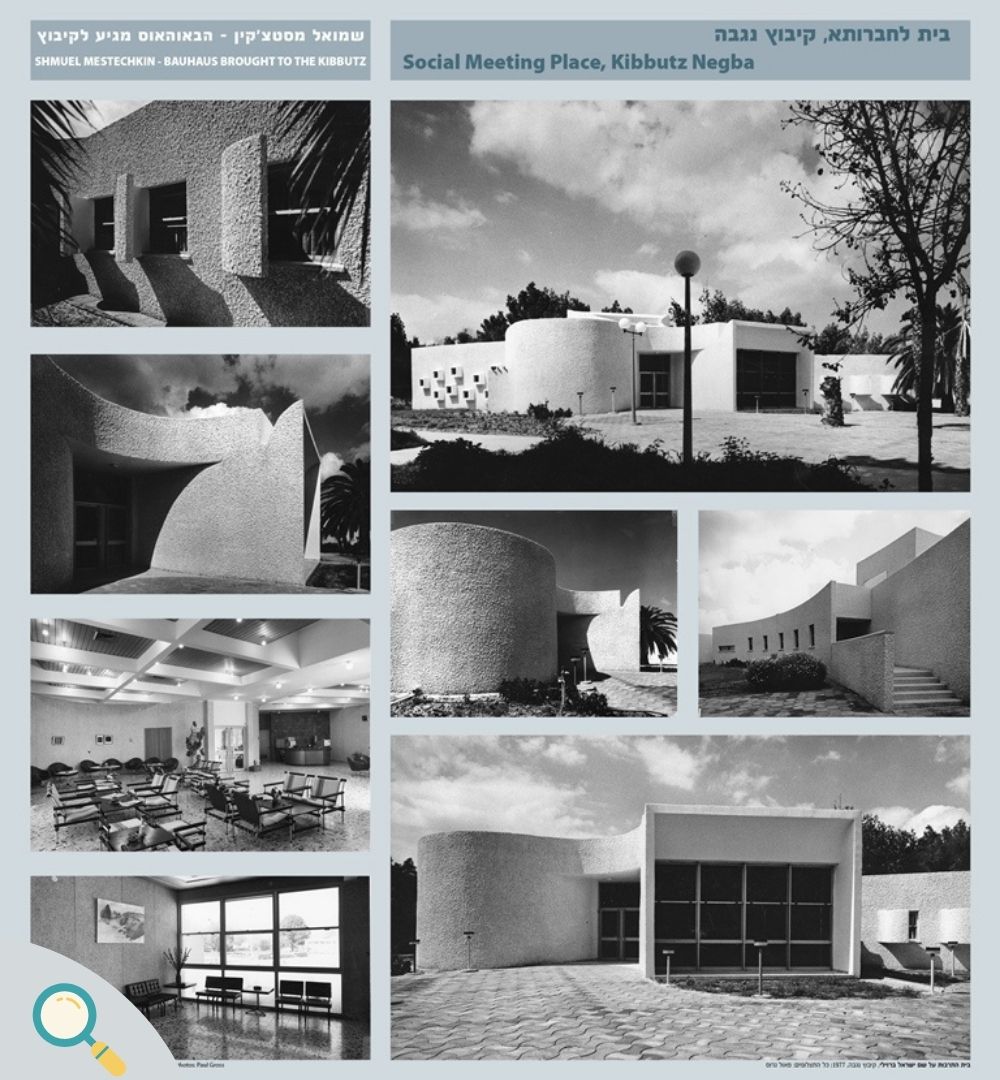